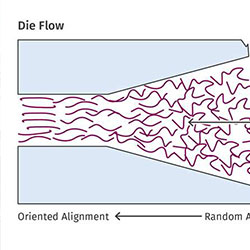 Molecular orientation occurs when melted polymer is sheared or stretched. If cooled quickly, this orientation is largely retained until the extrudate is reheated to a temperature that allows the molecular chains to move to their relaxed state.

Orientation occurs in every extrusion process due to the inherent strain applied to the long-chain molecules as the polymer is shaped and flows through the die. Some orientation through the die is unavoidable, and the magnitude depends on output rate for a given die design. A secondary annealing process is about the only way to reduce all orientation in extruded parts.

Polymer orientation can be measured for transparent polymers in the amorphous state by birefringence, and in both the amorphous and semi-crystalline state by infrared spectroscopy. The simple field test for orientation, often referred to as the “Chrysler test,” calls for cutting