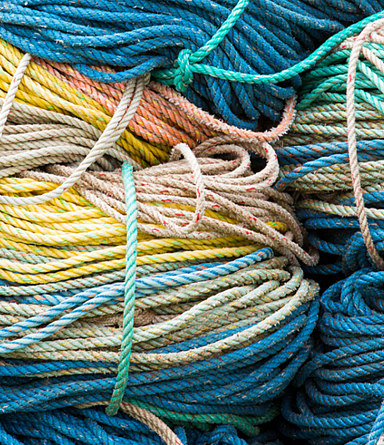 What is Nylon, and What is it Used For?

Nylon is a synthetic thermoplastic linear polyamide (a large molecule whose components are bound by a particular type of bond) that was first produced in 1935 by American chemist Wallace Carothers who was then working at the DuPont research facility in Delaware. Wallace produced what is technically known as Nylon 66 (still one of the most common variants). Demand for Nylon in particular and synthetic materials in general grew during World War II when natural items like silk, rubber, and latex were in significantly shorter supply.

Nylon is used for a variety of applications to include clothing, reinforcement in rubber material like car tires, for use as a rope or thread, and for a number of injection molded parts for vehicles and mechanical equipment. It is exceptionally strong, relatively resistant to abrasions and moisture absorptivity, long lasting, resistant to chemicals, elastic and easy to wash. Nylon is often used as a substitute for low strength metals. It is the plastic of choice for components in the engine compartment of vehicles because of its strength, temperature resilience, and chemical compatibility. 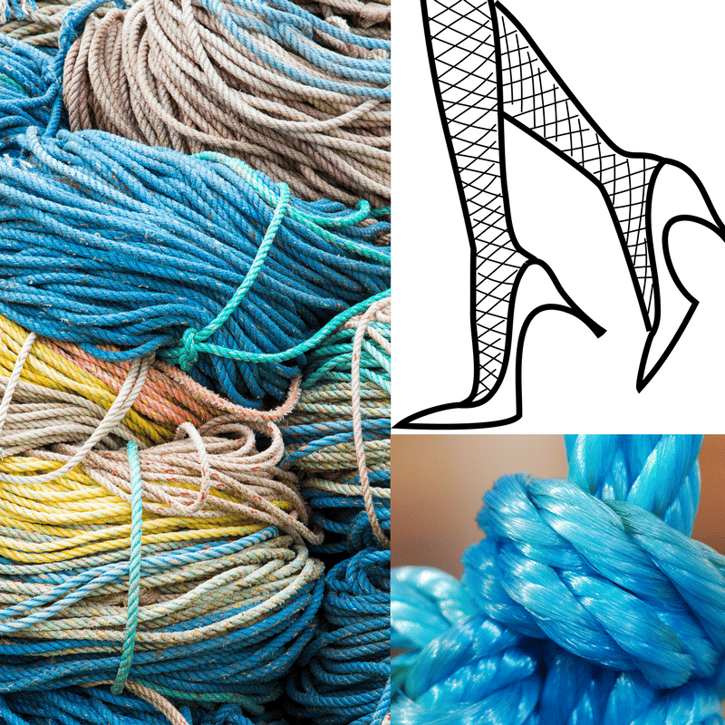 Nylon can also be combined with a large variety of additives to produce different variants with significantly different material properties. Here is a look at a composite gear made of both Nylon and carbon. 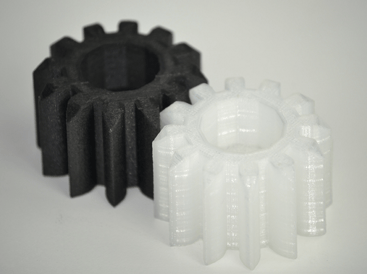 Nylon is commonly referred to using the chemical designation “PA” (e.g. PA 6 or PA 6/66) and is most commonly available in black, white, and it’s natural color (off white or beige). Perhaps the most common variant for engineering applications is Nylon 6/6. Nylon 6/6 can be extruded (melted and forced through a nozzle) and is therefore a good plastic for both injection molding and 3D printing. It has a high melting temperature making it a wonderful substitute for metals in high temperature environments (e.g. under the hood in a vehicle). The material’s downside is that it has relatively low impact strength (even when compared to other plastics, see the chart below). The following diagram shows the relative impact strength of Nylon when compared to the impact strength of other commonly used plastics such as ABS, Polystyrene (PS), or Polycarbonate (PC). Of note, the impact strength of Nylon can actually be improved by a process called “conditioning.” For this reason as well as the ease with which Nylon can be combined with other materials to improve its strength, it is important to check the material properties of the specific Nylon composite you are using.

What are the Characteristics of Nylon?

Now that we know what it is used for, let’s examine some of the key properties of Nylon (PA). Nylon is a condensation copolymer that it is composed of several different monomer types in combination with one another. It can be produced in a variety of ways, typically starts with distillation from crude oil, but can also be produced from biomass. Nylon is classified as a “thermoplastic” (as opposed to “thermoset”) material which has to do with the way the plastic responds to heat. Thermoplastic materials become liquid at their melting point (a very high 220 degrees Celsius in the case of Nylon). A major useful attribute about thermoplastics is that they can be heated to their melting point, cooled, and reheated again without significant degradation. Instead of burning, thermoplastics like Nylon liquefy, which allows them to be easily injection molded and then subsequently recycled. By contrast, thermoset plastics can only be heated once (typically during the injection molding process). The first heating causes thermoset materials to set (similar to a 2-part epoxy) resulting in a chemical change that cannot be reversed. If you tried to heat a thermoset plastic to a high temperature a second time it would simply burn. This characteristic makes thermoset materials poor candidates for recycling.

Why is Nylon used so often?

Nylon is often used in gears, bushings, and plastic bearings because of its inherent low-friction properties. Nylon is not the most slippery plastic available (typically we recommend acetyl if low friction is the only consideration), but it’s high performance in other mechanical/chemical/thermal properties make it a good choice for parts that could see a lot of wear.

Nylon is also an incredibly useful plastic for applications that actually do require both a plastic material as well as a high melting temperature. It is also incredibly diverse. Nylon can be adapted to a wide variety of uses because of the many different variants in production and the adjustable material properties of these variants resulting from the different materials Nylon can be combined with. At Creative Mechanisms, we have used Nylon in a number of applications across a range of industries. A few examples include the following:

What Are The Different Types of Nylon?

Although Nylon was discovered and originally patented by Dupont’s Wallace Carothers, it was produced (as Nylon 6) three years later (in 1938) using a different methodology by German research chemist Paul Schlack, then working at IG Farban. In the modern era it is manufactured by a large number of firms, each typically with their own production process, unique formula, and trade names.

How is Nylon made?

Nylon, like other plastics, typically starts with the distillation of hydrocarbon fuels into lighter groups called “fractions” some of which are combined with other catalysts to produce plastics (typically via polymerization or polycondensation). Nylon can also be produced from biomass which generally results in a more biodegradable material. The actual process for Nylon production falls into one of two methodologies. The first involves the reaction of monomers with amine (NH2) groups reacting with carboxylic acid (COOH). The second involves the reaction of diamine (a molecule with 2 x NH2 groups) with dicarboxylic acid (a molecule with 2 x COOH groups).

Nylon can be easily melted into filaments (useful for 3D printing), fibers (useful for fabrics), films (useful for packaging), sheet stock (useful for CNC machine manufacturing). It is also an easily injection moldable material.  Natural nylon stock is most commonly an off-white color and it is also commonly available in white and black. That said, nylon can be dyed into virtually any color. The material is readily available in filament form for 3D printing where it is heated and the melted filament is manufactured into the desired 3D shape.

When we prototype nylon parts, we CNC machine them. Just recently, we have been prototyping a number of plastic hooks for use with bungee cords. We start with an ABS FDM prototype to confirm size/shape/aesthetics/function. Then we CNC machine the hook in Nylon in order to test strength. The final step is injection molding the production parts.

With injection molding, nylon is sometimes filled with a certain percentage of glass fibers in order to increase its tensile strength. The percentage of glass is typically between 10% and 40%. The hooks we are injection molding are actually above 40%. The glass fibers do increase strength, but they also impact the way a part fails. With no glass fill, nylon will bend and yield before it breaks. With the addition of the glass fibers (especially at higher percentages), the failure becomes an instantaneous brittle break with very little bending. When nylon has a glass fiber fill it is referred to as, for example, 30% GF Nylon. (GF stands for “glass filled”).

What are the Disadvantages of Nylon?

Although Nylon has a high melting temperature, it does not stand up well to an open flame. It is a flammable material and burns easily when and if it is exposed to an open flame. Flame retardants can be added to the Nylon in order to improve flammability. For example, the nylon being used for the manifold in one of our new design projects has the highest flame rating (V-0).=

Nylon can also be negatively impacted from UV exposure, primarily from direct sunlight. Because of this a UV stabilizer is often added to the material before it is injection molded.

What are the properties of Nylon?